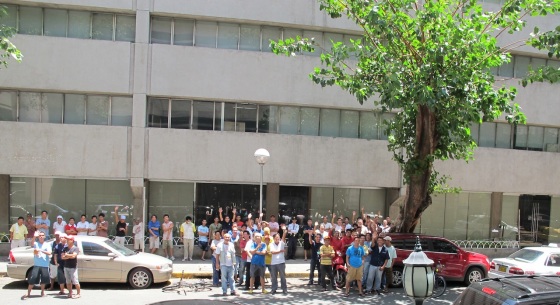 The fight was very intense.
Food at Murphy’s was inedible. We ate it anyway.
Few beers, and a cheering crowd at and in front of the pub.
I like Manila on a fight day. No traffic, no fuss, everything stops for 12 rounds.
Hope he’ll win next time.

I knew it, Manny was better: “When the decision was announced, a chorus of boos echoed in the arena. Judge Jerry Roth saw it 115-113 for Pacquiao but judges C. J. Ross and Duane Ford scored it 115-113 for Bradley. Ross and Ford gave Bradley five of the last six rounds. The punchstats contradicted the outcome as Pacquiao landed more blows, 253-159, with a higher percentage of accuracy, 34%-19%. Pacquiao also connected more jabs, 63-51 and more power shots, 190-108. The stats indicated that the fight wasn’t close – Pacquiao completely dominated Bradley. But two of the three judges saw it otherwise.”